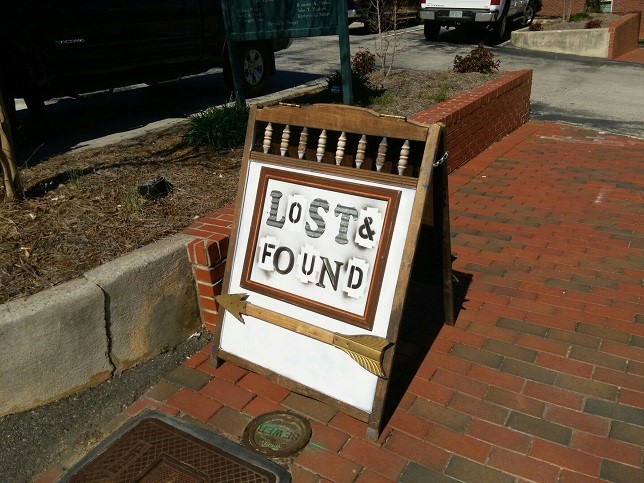 Downtown Salisbury is full of unique stores and sights that ensure any visit will be special. Lost & Found is one store that is a hidden gem for Salisbury. Though located near the heart of downtown, the storefront does not face one of the main roads. Just around the corner from the two-hour parking lot off E. Innes between Main and Lee, it is easy to swing by during a day downtown, but unfortunately it can also be easily missed.

Lost & Found, which is almost two years old now, is owned by Iain Rocco. Although a native of Michigan, Iain and his family have been in Salisbury or the surrounding area for years now. He ran a smoke shop for years, but Iain also loves to collect all things vintage, including records, art, cameras, and typewriters. After years of accumulating unique knick-knacks and vintage curios, Iain reached a point where his collecting needed a purpose. Since there was no end to the number of flea markets and yard sales to venture for new collectibles, he had a choice to make. “I figured that it would be better if I could tell people I was collecting things for the sake of opening shop,” Rocco states.

The transition from running a smoke shop to opening Lost & Found in Downtown Salisbury was not a drastic one. Iain still sells smoke-shop-style wares, but now in addition to items related to video games and television, and vintage finds like cameras, typewriters, and records. Iain’s love for music is clear in the store, as the door is often propped open to let the music out and he hosts Open Mic Nights every Thursday.

Iain supports local artists through consignments with people who make jewelry, hats, greeting cards, and even soap. He also has contact with local manufacturers, including a glass blower and a leather-worker. With constant additions of new wares, the themes and the organization of the store is often in fluctuation. This guarantees that there is always something new to discover in Lost & Found.

The store itself is a fascinating find. The location was once the loading dock to the building behind it, but now is a representation of a repurposed space with a unique atmosphere. There is creativity in every inch of the place, from the ceilings to the walls—even the methods of displaying the wares are intriguing. Some of the displays are vintage products for sale themselves. There’s always something interesting to find no matter how many trips through the shop are made. Fans of things like vintage video games, quirky buttons, and TV shows from Doctor Who to Stranger Things can find something special to show off their passions.

Come peek in at Lost & Found! Iain keeps the store’s social media sites, including Facebook, Instagram, and Twitter, active and hopes to have a special celebration for the store’s second birthday this April during the summer of 2017.