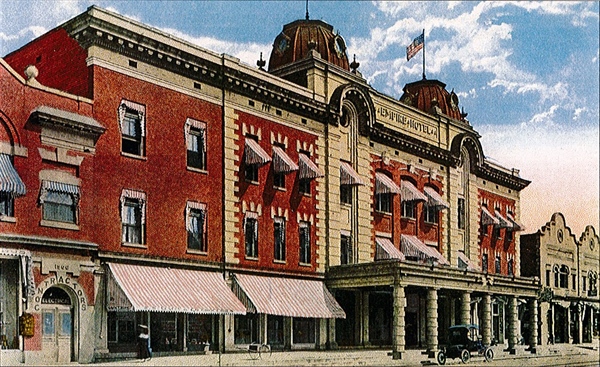 Downtown Salisbury, Inc. (DSI) has released a request for proposals (RFP) to qualified developers to purchase and redevelop the historic Empire Hotel located in downtown Salisbury. The newly-established Empire Hotel Redevelopment Task Force will be responsible for reviewing the proposals received electronically by the deadline of 5 p.m. on Monday, Nov. 2.

DSI, a private 501c3 non-profit organization responsible for managing redevelopment activities in the Downtown Salisbury Municipal Service District, purchased the Empire Hotel property in 2007 as a step toward identifying a developer to complete an adaptive reuse project of this property. Since that time DSI has entered into a contractual relationship with developers on two separate occasions. Primarily due to the downturn in the economy, neither contract resulted in a project moving forward. It is anticipated that the Empire Hotel redevelopment plan will add to the existing economic vitality of downtown Salisbury.
The immediate downtown area has experienced significant public and private sector investment in the service district. Since its beginning as a North Carolina Main Street community in 1980, a combined $160,339,828 in public and private sector investment has taken place. This trend continues today with the development of Bell Tower Green, a privately-funded $12 million park under construction two blocks from the project site, scheduled to be completed in 2021. Bankett Station, a $5 million project that is underway, includes a 12,000 square foot, two-story mixed use development and a 9,000 square foot warehouse rehabilitation on the corner of East Innes Street and South Lee Street. Smaller adaptive reuse projects ($200,000 – $500,000) are underway in two other downtown locations.
The Empire Hotel Redevelopment Task Force will be tasked with preparing proposal review criteria, considering developer proposals, and making recommendations to the DSI Board for developer selection. Whitney Wallace Williams, DSI immediate past president, will chair the committee. Additional members include:
• Gianni Moscardini
• Mark Lewis
• Tim Proper
• Hannah Jacobson
• Mayor Alexander
• Brian Miller
• Ed Norvell
• Samantha Haspel
• Davis Cooke
• Luke Fisher
Consulting Community Partners:
• James Meacham
• Rod Crider
Williams shared, “The DSI Board remains excited that ample developer interest continues for the Empire project. Our Board set an aggressive deadline by which to receive proposals of November 2, 2020. Due to growing developer interest, we kept development requirements broad to allow our task force to consider a creative variety of developer proposals. We are cautiously optimistic that we will find a new developer with the vision, capital, and drive to complete what our organization set out to do over a decade ago: rehabilitate and revitalize nearly an entire block of our downtown.”
To download the Empire Hotel RFP, please visit downtownsalisburync.com. All proposals should be submitted electronically via email to Williams, the Empire Redevelopment Task Force Chair, at wwallace@wallacegraham.com, no later than 5 p.m. on Monday, Nov. 2, 2020.