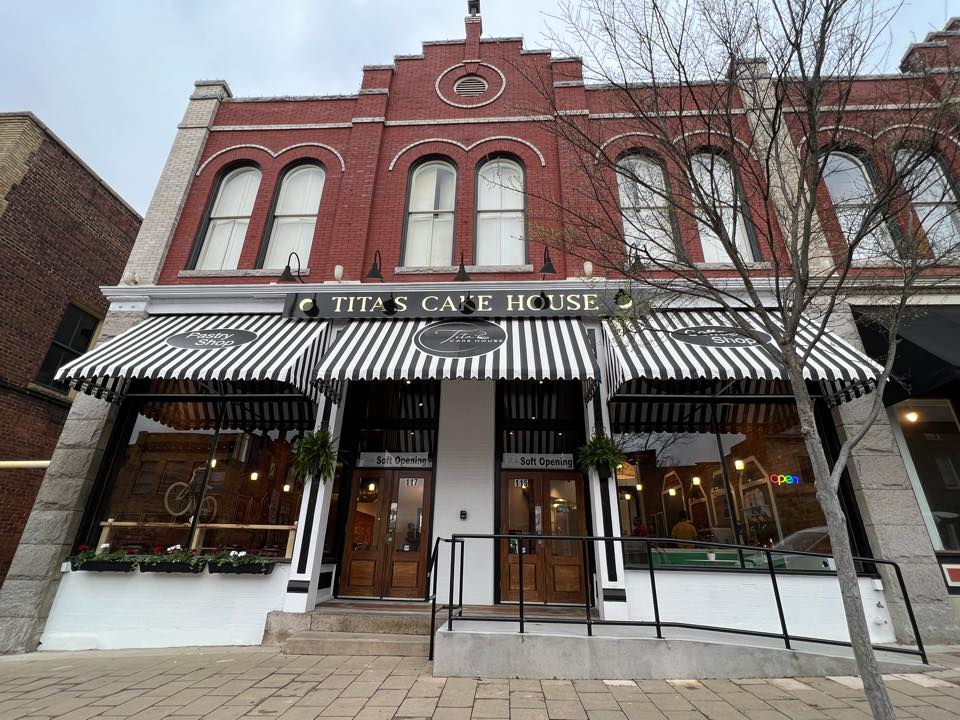 SALISBURY — In his home country of Chile, Luis Gomez Valencia commanded military bases as a captain in the country’s Navy.

The retired military officer is now serving sweets with a smile at Tita’s Cake House in downtown Salisbury. The pastry and coffee shop, located at 115 E. Innes St., specializes in traditional Chilean baked goods and treats.

The venture is a family affair. While Luis may have been a captain in Chile’s Navy, his rank in the shop’s kitchen is superseded by his wife, Carla Manriquez, and mother, Lucia Valencia-Carter. Lucia, known to family and friends as “Tita,” has been in America since the mid-2000s. Luis and Carla only moved to the states last year with the dream of opening the pastry shop.

Tita’s held its soft opening earlier this month. The fresh facade has drawn in plenty of customers so far, many of them curious to see what’s become of The Smoke Pit’s old location. Most have decided to enjoy a pastry, or two, and a cup of coffee.

“It has been over our expectations, because people have been very nice, very loving and everybody is happy with this,” Lucia said.

Tita’s might not exist if it wasn’t for a small advertisement in one of Chile’s newspapers that caught Lucia’s eye about two decades ago.

Lucia is the second oldest of nine children. As a child, her older brother had trouble pronouncing her name, Lucia, so he called her “Tita” instead. The nickname stuck and was soon adopted by her entire family and friends.

She grew up attending an American school in Chile where she learned to read and write English. She continued to study the language in college with the goal of becoming an English teacher. Lucia did just that, but she also opened a pastry shop where she made and sold classic Chilean sweets. She ran the business and taught for more than a decade before closing the shop in search of better work-life balance.

Years later, Lucia saw an interesting advertisement in the local paper. It was strategically written in English and posed one question: do you want to teach in the United States?

The advertisement had been placed by Visiting International Faculty, now known as Participate. Since 1987, the program has brought thousands of international teachers to American k-12 classrooms to teach foreign language classes. An empty-nester, Lucia decided to pounce on the opportunity.

In 2006, she moved to Virginia and started teaching language classes. There, she met and married. Lucia and her husband, Donald, eventually moved to Salisbury so he could have better access to healthcare at the Salisbury VA. Lucia got a job with Rowan-Salisbury Schools and spent years teaching English as a Second Language classes at Koontz Elementary.

Meanwhile, her oldest son Luis was rising through the ranks in Chile’s Navy. During his career, Luis, Carla and their children were stationed in various Chilean military bases. For two years, he was Navy governor of Easter Island. He also spent time in Punta Arenas, the chilly capital of Chile’s southernmost region and a popular starting point for excursions to Antarctica.

Five years ago, Luis and his wife Carla brought their children to visit Lucia in Salisbury.

The couple was immediately charmed by the city.

“They found that the downtown of Salisbury has kind of a magic, something special, something different,” Lucia said.

That visit planted a seed.

Thinking about his post-military career, Luis and Carla started planning a pastry shop of their own. In preparation, Carla took culinary classes to learn the proper techniques to make Chilean desserts and pastries. When Luis retired after 32 years in the Armada de Chile, the couple decided to move to Rowan County and open their dream eatery.

The move wasn’t without nerves.

“(Luis) was very brave in coming here because he had a beautiful career (in Chile),” Carla said, her words translated by Lucia. “He would have a lot of different options to pick from there, good ones. But he preferred to come here to be with his family and his mommy too.”

Carla and Luis’ plane touched down on July 4 and soon after they started preparing to open the shop. They decided to name it Tita’s after Lucia.

“When I heard this, I cried,” Lucia said.

The couple looked at several properties downtown, but were drawn to the former Smoke Pit location because it already had a kitchen. That didn’t mean the space was move-in ready for them. Carla led efforts to reinvent the interior, combining inspiration drawn from visiting other cafes with her own passion for using thrifted items as decor.

There’s plenty of interesting items on the walls to look at, but the star of the shop is what’s within the glass bakery display case. So far, Tita’s has sold mostly pies and cheesecakes topped with marmalades, fruit or nuts. The plan is to offer a wider selection of Chilean cakes and desserts once kitchen staff is trained.

“Everything is handmade, the same way we do it at home,” Lucia said.

Carla said they’ll only make the “best of the best” baked goods and pastries, using all natural ingredients.

Lucia and Carla are excited to introduce local taste buds to manjar, a milk based confection similar to caramel and closely resembling Dulce de Leche. The sweet substance is often slathered between layers of cakes. A few manjar-filled multi-layered cakes were placed in the display one afternoon last week, and they didn’t last long.

To pair with its pastries, Tita’s sells ice cream made by Mooresville Ice Cream Company and offers an entire coffee menu. The shop uses beans from Jagshead Coffee, a Charlotte-based roaster and family-run company that sources its beans from El Salvador.

Carla said she envisions Tita’s as being a place for families, workers and friends to gather for a delicious taste of Chile.

More information about Tita’s can be found online at titascakehouse.com or on its Facebook page.